Still half-term (and the last day off before Ella heads to holiday club for a couple of days), the sun is shining again (how lucky are we) and after our trip to Inflata Nation yesterday we both wanted to get out in the sunshine, fresh air and not be cooped up anywhere indoors.

Neither of us wanted to be sat in a car for ages so decided on The Edge for a walk. The Edge National Trust area in Nether Alderley, Cheshire is a place we return to time and time again as a family as it is only a 15 minutes’ drive from our home.  I  have never written about it so time to change that!!!

I didn’t realise they now ask you to show your National Trust Card at the payment machine in order to get the free parking. The car sticker is no longer enough and we had left ours at home, we were however, reassured by a volunteer that on this occasion it would be OK. It was a relatively quiet day, but we won’t forget in the future.

We had been pottering for a couple of hours in the morning so arrived around midday and mini-me said she needed “energy” so we decided to grab some lunch before heading off on our adventure. There are two options on the site if you are not taking your own food:

The Wizard Inn is a lovely, traditional, country pub which is very dog friendly. Like the walk we have visited this lovely inn several times for both a refreshment post walk and also to eat. The food is delicious – locally sourced and the menu seasonal. I can recommend the Sunday Roast but would suggest booking if on a weekend. It also has a small enclosed beer garden with plenty of space for the little ones to run around in.

Right next door to the pub – the Tea Rooms offer an alternative. Delightful staff serve a range of sandwiches and light bites as well as tempting cake and an afternoon tea and they also offer indoor and outdoor seating options. Again, they are very dog friendly so no need to worry about your four-legged friend whist you grab a bit to eat.

Ella and I opted for the Tea Rooms and after much deliberation chose the BLT (me) and Cheese on Toast (Ella) along with a couple of drinks. Neither of us were disappointed and both got menu envy when it arrived so decided to share. Our very own tea room tapas. The BLT was delicious, they didn’t skimp on filling and with a few crisps on the side it was definitely a winner. The cheese on toast too was pretty special. Not your average cheese on toast – this was strong cheese, tons of it and gave you that fully satisfied feeling on eating. 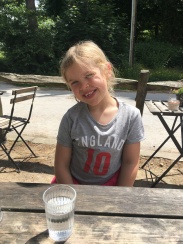 Suitably stuffed we decided to get going as otherwise we would be wanting a nap.

The Legend of The Edge

Now Legend has it that one day there was a farmer riding near the woods on his white mare, he was heading to Macclesfield to sell his horse when he happened upon an old man carrying a staff who offered to buy the horse off the farmer.  The farmer refused thinking he would get a better price in the town.  The old man advised the farmer that he nobody would buy the horse.  Lo and behold when in the town many admire the beautiful steed but nobody made him an offer.

On returning to Alderley Edge the old man was waiting for him and this time he agreed to sell.  The old man asked the farmer to follow him and led him through many paths until he came to a big rock.  He touched the rock with his staff and it split in two revealing a pair of iron gates.  The old man asked him to follow him and eventually they arrived at a cavern with 140 knights all but one with a white horse next to them.  He said that they were there waiting to fight the last battle of the world and he was to wake the knights when it happened but there was one horse missing.

After laying the horse down into an enchanted sleep and then took the farmer to another cavern which was filled with gold, silver and precious stones and told him to take whatever he could carry in payment for his mare.

He then let the farmer out of the cave, the farmer now knowing the old man was a wizard he passed through the Iron Gates and then turned around and the man and the gates had disappeared.

There are a quite a few trails you can follow at The Edge – or you can just find your own way around. Ella wanted to follow one of the trails, so she could lead the way and “be in charge” so she decided on the blue one.

We had a hunt around for a walking stick (its just a bit of a tradition) and I was told that “Daddy always gets the best ones for me” talk about hitting you where it hurts. However, I didn’t do too bad getting both of us a Wizarding staff. We set off on our trail, following the arrows but stopping a lot along the way for lots of climbing, clambering, exploring amongst the woods.

The woods really are magical, all the trees, including the fallen, have such character. We found what could very well be the “Faraway Tree” from the Enid Blyton books. Ella even commented how they all seem to have faces and look different to “normal trees”. We both said you can imagine them all talking when it gets dark and pictured all the woodland creatures coming out at night. The area really does open your imagination.

I am pretty sure all routes lead to the to lookout called Stormy Point where the view is just spectacular, there is a little cave and there are lots of rocks for the little ones to jump around (whilst simultaneously giving you heart failure). If you are to bring your own lunch, then you cannot go wrong with setting up your picnic with the panoramic vista of the Cheshire Countryside.

Back along the path and there is more log jumping, tree climbing and making up of stories to be had. I did go to show Ella the caves, but I think after all the magical stories it might just have given her the spooks a little. 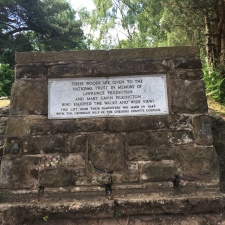 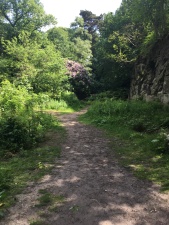 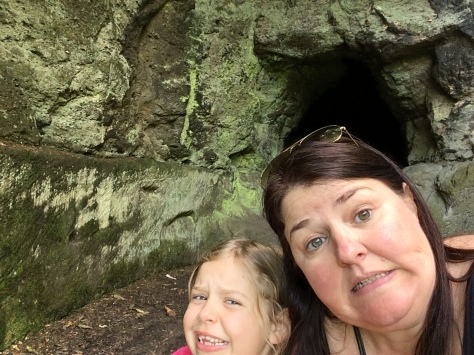 The Edge has several trails and hosts a few events throughout the year that we must check out at some point.   It isn’t a huge area but enough for an amble for a couple of hours you cannot go wrong and if you stop at the eateries you can certainly spread it out further. There are no massive hills so nothing too strenuous.

Afterwards you can always stop off in nearby Prestbury/Alderley Edge the incredibly affluent villages on the doorstep of The Edge. You may even get lucky/unlucky (depending on your preference) and spot a footballer, WAG or Cheshire Housewife.