St George’s Market in Belfast is the last surviving market hall of its kind in the city and was built between 1890 and 1896. It is also one of the city’s most famous landmarks. The market host over 250 traders over each weekend as well as live music as well as a number of events and by all accounts is a must go to venue. 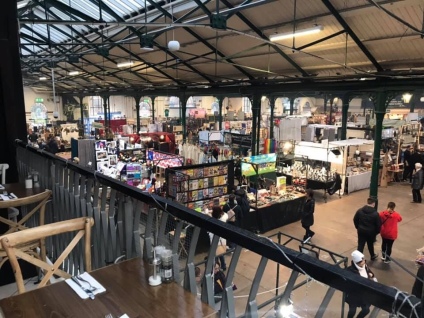 So, I knew that after a day/night of dancing, laughter and a few drinks (to say the least) we would be in need of a good breakfast, so I booked us into George’s of the Market just above the main hall. We were tempted with just grabbing some food in the market, but the pull of guaranteed seating was too strong.

Our reservation didn’t stop us having a good mooch around the stalls though, so we arrived early and had a wander. The market had all your usual craft and artisan goods and then around a central area there were numerous food stalls offering what looked like mouth wateringly good food. I would say there was something for everyone from a local sausage barm (or whatever your local area calls it), Mexican, Falafels, to Paella and everything in between. Most of the food stalls are surrounding a seating area and on certain days there is live music, so it is really easy to spend a few hours just kicking back here.

The restaurant is just above the main market and is obviously a popular place as a few people came in after us and as they didn’t have reservations, they were unable to seat them. We had booked for 11.30 which is pretty much a late as you can go for breakfast as the lunch menu starts at midday.

We had a lovely booth (again) and they brought some drinks whilst all the mums arrived. I had a freshly squeezed orange juice which was just the ticket after a night of indulgence.

Once everyone had arrived, we ordered breakfast some opting for Eggs Benedict, some Pancakes but I chose the Crushed Avocado with home made relish and bacon on sour dough. We could see all the food coming out and it looked so good. I am pleased to report back that it didn’t disappoint. The restaurant states that it uses a lot of the market so maybe we didn’t miss out. 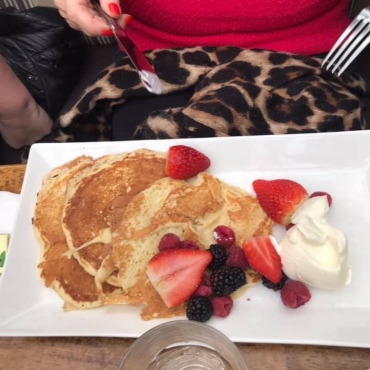 After finishing our food we just had enough time to grab some local chocolate for the kiddies (to ease the Mummy Guilt), watch a bit of the live music before it was time to head back to the airport.

The breakfast was just the ticket and every one of us really rated the plate of food we chose, the service was spot on too and so if you are heading to Belfast I would definitely recommend you while away a few hours at this famous landmark.

If you want to read about the rest of our weekend then check here.

One thought on “Review – Georges of the Market, Belfast”