After an epic week in Morzine skiing we had decided to tag an extra couple of days on to the trip in Geneva. This was mainly due to the fact that the flights were so expensive going Saturday to Saturday, so it worked out cheaper to book a hotel for a couple of days.

I had built up enough points on my IHG card to qualify for a free night for the three of us, so we opted for the Intercontinental Geneva. It was not quite in the centre but walking distance to the United Nations and with great transport links.

On arrival at Geneva Airport a very helpful lady told us that it was much cheaper to jump on the bus to the hotel rather than a taxi for such a short ride and that the stop was pretty much outside, so we took her advise and it was a good shout.

We arrived at the hotel and despite the pretty unattractive exterior the lobby was beautiful and there was what appeared to be a lovely bar, restaurant.

The Intercontinental Geneva has a variety of rooms, suites, luxury suites and The Residence (located on the top floor with East/West wing, 2 master bedrooms and 9, yes 9 additional rooms).

We had booked a Superior Room but were advised that we had to upgrade due to the room not being big enough for Ella but they did this free of charge which we were pleased about. The room was ready even though we were there much earlier than the usual check-in time, so we could go straight up and get rid of the bags. All in all, a good start. 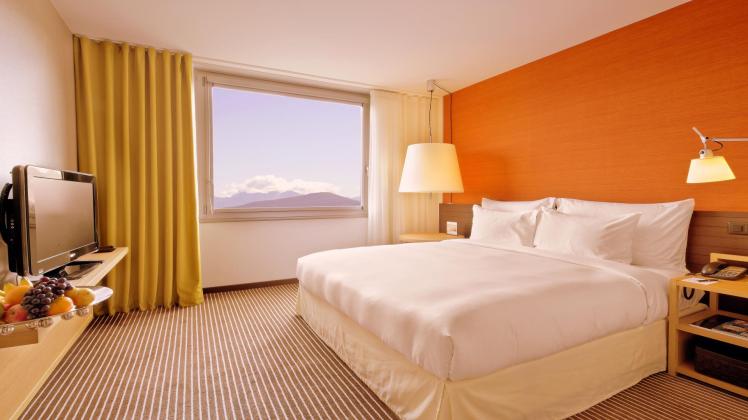 When we got to the room it was a double-double so Ella was thrilled to have a big bed all to herself. The room was a decent size but it did feel a little dated compared to the opulent lobby and maybe it needs a bit of a refurb. However, it was spotlessly clean and that is important.

The room came with dressing gown and slippers and Ella insisted on wearing one despite being so big she was tripping over it but she found this hysterical.

There is an Outdoor Pool this is open from June to September so if visiting during this time it would be great to have access. We had really hot weather when we were there but unfortunately a bit too early in the season. The pool is a good size at 20 metres long and on the website it states it is heated to 26 degrees so even on those slightly colder days it will offer respite from the city.

There is also a fitness centre with an variety of machines and free weights – open daily. The fitness centre is located by the Spa by Clarins which offers a range of treatments.

The concierge staff, in fact all the staff that we came in to contact with, including reception and the doormen, were all super helpful. Offering advise on what to see, what was going on both in the city and just outside,  as well as places to eat.

The Woods Restaurant is open for breakfast, lunch and dinner and their Sunday brunch. It is designed by Toni Chi and is very Zen with lots of bamboo, wood, and a small pond – all very soothing. The food being inspired by local produce and tradition.

Open from end of May to September the Poolside Restaurant offers an alternative option for breakfast plus a more Mediterranean flavour for lunch and dinner. 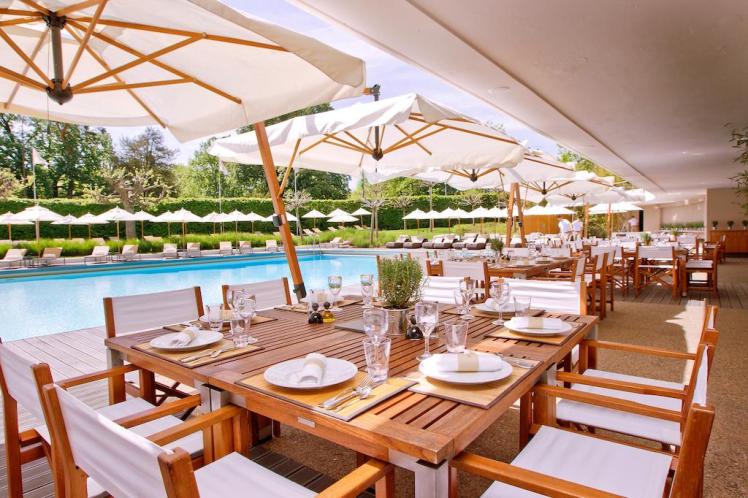 Le Fumoir Ba and Cigar Lounge as the website states, will seduce you with inspired and original cocktails and the widest selection of rums in Geneva. And of course, as the name suggests, Cigar Aficionados will not be left out. The bar opens Tuesday to Saturday.

Bar Les Nations, going for the New York Speakeasy vibe the bar offers cocktails, teas and samples from the Pastry Chefs Desert Trolley. Another opulent place to hang out and open daily.

As with most places in Geneva restaurants and bars are pretty expensive and hotels often going that little bit higher. We were at the end of the holiday and so opted for some more local places to save the pennies so didn’t sample any of the bars/restaurants.

As we had used the points to book the hotel too we were booked on a room only price and the cost of the breakfast was 46 CHF which is a whopping £35 per person. This was more than our Yorkshire Born and Bred instincts would allow.   We have had Champagne brunches for less and we just didn’t want to stretch that much.

Not sure if it is just the Intercontinental but they did provide a city pass for the duration of our stay which basically gave us free access to all local transport (including the taxi boats across the lake) within the city. The transport network is really good, super-efficient and pretty easy to navigate so this was a bonus.

Good hotel, with some great facilities if you are there at the right time of year. The décor does feel a little dated in the rooms but nothing offensive. It is not in the centre but easy to get around and only a 5-minute walk down to the UN Buildings. Would I recommend it as a hotel – Yes – if money isn’t a consideration.  But would probably advise to go for a rate including breakfast if it doesn’t stretch too your budget too much.