So it was time for our annual Christmas escape the house adventure and after a few years at Alton Towers it was time for a change.  Bonny Scotland’s capital was the choice this year.

Early morning we boarded the train, set out our stall on the table, books, magazines, breakfast, drinks and settled in.  Ella is a great traveller and as long as she has stuff to do, read, eat she doesn’t get too restless.  She is a fab travel companion and I suppose one of the reasons I decided to write this blog was as a kind of journal of our memories for her.  I think if these times were stressful and full of complaints I wouldn’t want to relive them so much but we are pretty lucky in that respect. 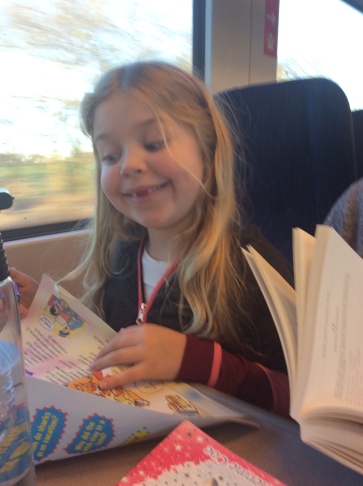 So we alighted (always wanted to write that word) at Haymarket and quickly checked in to our hotel just outside the city centre.  We were staying at the  Holiday Inn Edinburgh which we picked for the value for money it offered us.  With Hogmany around the corner the options for a good value break were thin on the ground.  It was right on the bus route and only 10 minutes on the bus from Princes Street and if you are including the zoo in your itinerary then it is right next door.

We arrived to a LOT of snow so were not bothered by the zoo this time around, ( plus I always feel a bit sad after visiting) but with Ella’s obsession with animals it may be added another time.

So we jumped on the bus to Waverley Station and went a wandering, we pounded the streets of the old town, popped in and out of shops, markets etc and then due to the cold popped into a watering hole (for warming reasons only … honest) in Grassmarket Square.  There we decided to head up Johnstone Terrace and round the corner to The Scotch Whiskey Experience. 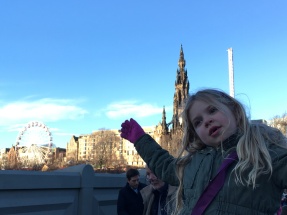 So Whisky and seven year olds shouldn’t really go together but a few sites and to do lists had recommended so we took a chance and it’s was great.  From the ride around at the start, through smelling the regions and the tasting our preferences (Ella tried the kiddie amber liquid Irn Bru) to the cellar where thousands of bottles were displayed it was a  couple of hours well spent.

Whiskey done, we headed down the hill to Rose Street to meet up with one of my old travelling pals who I met when on my round the world trip in my twenties.  We hadn’t seen each other since our wedding day 9 years previously but as with all good friends it was like slipping right back in.  Our little family and her little family spent the next couple of hours putting the world to rights over some lovely G&Ts, served by a fab waiter who knew his stuff, and some lovely grub at The Rose Street Brewery.

We finished our first day heading to the little fair next to the markets for a few rides for the little ones.  Hugs and kisses and a promise to not leave another 9 years and we headed back up to our hotel.

Day 2 we were up and at em!!  Jumped on the bus and headed back into town, grabbed some brekkie at a quirky little café on Cockburn Street and headed over to Edinburgh Castle.  I have been to Edinburgh many times with work over the years but never done any tourist stuff so this had to be on the list.  The setting with the snow capped mountains and Arthur’s Seat in the distance was gorgeous and we spent a few hours wandering around the walls and inners of the castle including the prison and kept the little one entertained by completing a quiz – all for a sticker! 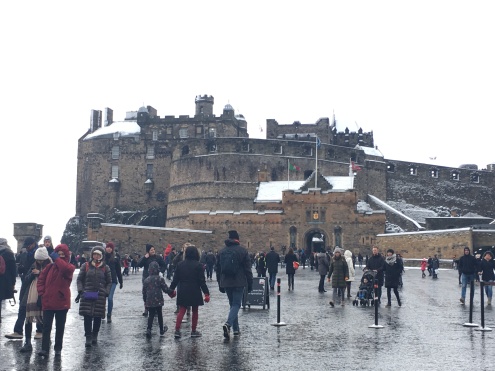 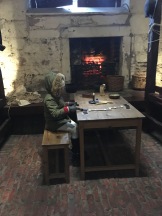 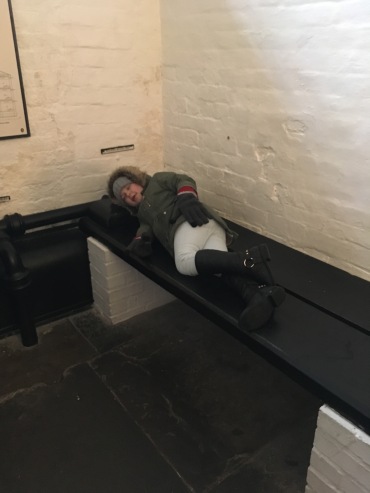 Once again we headed down the Mount and on to Hanover Street where we met up with an old school friend of the Nigel’s this time.  This time it was over 20 years since last seen but once again the years melted away as they reminisced.  We killed a couple of hours but then it was time for food.  I had done my research and would have loved a visit to Tom’s Kitchen as we do love our good restaurants but that again may be another time.  He does have a sister venue, a Gastro Pub in Stockbridge, called the Scran and Scallie which was about a 20 minute walk from where we were and we decided to give it a go.

The place was packed but we managed to get a table, the vibe was very cool, the food fantastic and we enjoyed a flight of local beers with our Scran.  Overall a great way to finish a lovely day.

Day 3 was our last day – brekkie and a quick swim in the hotel pool and then we dumped our bag at the station and went wandering for a final time around Princes Street.  We decided on a Pizza for a late lunch so we were sorted for the journey home and then it was over to Waverley for our train.  An exhausted Ella made the most of the long trip and caught some zzzzz’s. 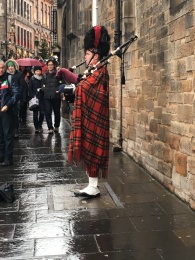 The weather was typical Scotland – cold and wet with the added advantage of a sprinkling of snow but our first mini-break in Edinburgh was great – there are still some things that we would like to see/do but the weather didn’t permit but I am sure we will be back some time.