So the Wilbennetts have not been able to make Cloudspotting Festival with our friends over the last few years due to other travelling commitments but this year was the one we would make it.  http://www.cloudspotting-festival.co.uk/

Located in the tranquil Gisburn Forest in the Forest of Bowland it was such a great setting.   We arrived on the Friday lunch time after a monsoon type downpour the night before – it was going to be a bit of a slog getting sorted.  Our fellow camping  buddies struggled with wheelbarrows but my ever resorceful husband bumped into a man with a van (well a buggy) and won the award for most resourceful by getting a lift.  He also claimed best £5 spent (maybe ever).

So, me and the hubby met on a campsite during our Eurocamp days in the the 90’s so we like to think we are pretty good at this – however, some of our camp mates even put us to shame.  Believe it or not for a bit of a travel snob I get massive camping envy too.  We definitely need to revisit our equipement.  Gottta love a bit of “Go Outdoors” shopping.

So camp set up it was time for a little explore.  Now Cloudspotting is not a big festival by any stretch of the imagination and there are only 2 small stages but it is an “Arts and Music” festival so they have plenty going on for the kids., Ella got involved with the all the crafts as any 5 year old girl would she was a mud splattered glitter and glue concoction but a very happy one.. 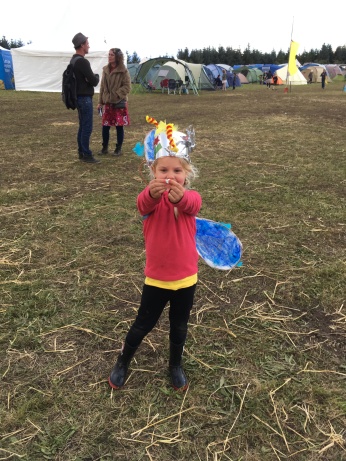 We settled into festival life with ease few cold beers in hand some easy music and our tribe of friends/extended friends just hung out and got down and dirty.  My idea of heaven.

Friday night hubby did the night duty once the kids were too exhausted to even sit up anymore so my fellow partygoers hit one of the small stages to watch the wierd and wonderful Henge.  Absolutely bonkers but brilliant and captivating.  I don’t think I have ever seen an act like it.  To finish they led the small crowd to the main stage like the Pied Piper to watch the awesome Honeyfeet.  We ended the night in the Barn in the Woods for a bit of a dance party action and I was temporarily taken back to my youth for a short while.  Finger pointing I will admit to.

After a few funny escapades during the night from fellow campers which provide us with many awards for T**t of the festival to name a few we settled into day 2.  Ella got involved with all the kid stuff and found herself upside down on a trapeze.  I was convinced she was going to sack off her current future desire to be a vet to run off with the circus (no such luck for me and dad).

Highlight of the weekend went to the bug parade whereby all the kids got to dance, shout and bang drums sticks etc through the campsite displaying all their crafty paraphanelia.  They finished at the stage where the band joined in and the kids whooped even more.  Seeing the joy on my little butterfly’s face was a treat and then she wanted to stay and mosh down at the front to the band.  Proud mummy moment.

Sunday we had to pack up as our next holiday was starting a couple of days later but we had a morning with the tribe and headed off happy and tired and looking forward to our next family festival.

Cloudspotting UK – give it a go.

One thought on “Cloudspotting 2016”